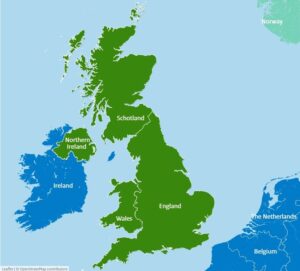 This is the fourth in a series of blog posts that responds to some of the suggestions made in response to the recently conducted Library Committee survey. This post will focus on the comments made regarding source books for other countries. The survey also asked, “Do you ever use the CGS library to research other countries?”

In the previous post, I shared that the top five countries named were Ireland 56, Germany 40, England 39, Scotland 29, Canada 20. Sweden and France tied at 12 votes. 10 people said United Kingdom. Here’s the rest of the results.

Adding up all the countries that make up the United Kingdom gives us 96 votes – the clear winner – an interesting stand out.

This is helpful information that will help guide new book acquisitions.

Response: Currently we hold 18 books with information on this area of Germany. Given the number of members who are researching in Germany this may be another opportunity to increase our offerings – so thanks to whomever added this suggestion,

Comment: Countries that are listed most in this survey.

Response: Yep, that makes sense to me.

Response: Our library holds a lot of sources on royalty – 388 items in total that includes several journal articles and 94 print books. Before I checked our library catalog in WorldCat, I guessed that they might all be older books purchased or donated by some of our earliest members; but I was wrong. Our collections include a good number of recently published books on royalty. (They overwhelmingly relate to the royal families of Great Britain, although there are a few books that look at relations with the Spanish crown when California was a Spanish colony.) Here are a few examples.

Blood Royal: Issue of the kings and queens of medieval England, 1066-1399 : the Normans and Plantagenets, published in 1996

The forgotten monarchy of Scotland: the true story of the Royal House of Stewart and the hidden lineage of the kings and queens of Scots, 1998

The blood royal of Britain: being a roll of the living descendants of Edward IV and Henry VII, Kings of England, and James III, King of Scotland, 1994

A final note: In part one of this series, I responded to a request for more online information for UK research and I promised to ask Maureen Hanlon to put her list of links for Irish research on our website. Thanks to Maureen and our website manager Theresa Murphy, that list is now available on our website on the “Research Links” page under the Research Tab. Now, aren’t you glad you took the time to respond to our survey?