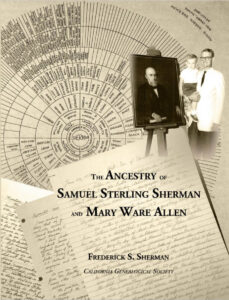 The research for this book was done by Rick Sherman, a past president of the California Genealogical Society. Rick passed away before he was able to publish the book so members of the society agreed to complete Rick’s work. CGS members compiled and edited the book and published it in 2017.

Having enjoyed the hobby of genealogy for about thirty years, I judge that it is time for me to write down what I have learned about my ancestry. I do not wish to deprive my descendants and relations of the pleasure and excitement of discovering these things for themselves, but hope that this account will interest and inspire some of them to carry forward what is an intrinsically endless project.

As far as I have learned, all my ancestors came to this country from Europe, predominantly from the British Isles. They were in the vanguard of that migration, starting at Jamestown, Plymouth and New Amsterdam before the seventeenth century was a quarter over. The latecomers arrived with the great Scots-Irish immigration in the first quarter of the next century. All ancestral lines were established here before the American Revolution.

On my mother’s (Allen) side, they came exclusively to New England—my mother used to say that all her ancestors were born within a hundred miles of Boston. She was not far wrong. I have found only one exception, born 230 miles away in Nova Scotia. Of course, I don’t count those born before their families crossed the Atlantic.

My father’s (Sherman) side adds many more New England lines, but my grandmother Sherman was a Kentucky-born woman, whose ancestors came in through Virginia, Maryland and New Amsterdam. She was intensely proud of her ancestors, though not very accurately informed about them. Frederick S. Sherman, September 2007