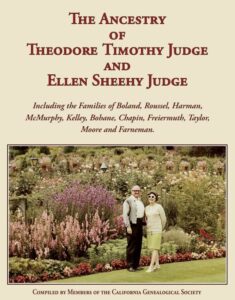 The Ancestry of Theodore Timothy Judge and Ellen Sheehy Judge

Compiled and edited by members of the California Genealogical Society, 2010

Theodore Timothy “Ted” Judge died in Cupertino, California, June 11, 2008. Although neither he nor his late wife Ellen Sheehy Judge left descendants, they shared a mutual interest in family history which they had enthusiastically pursued over the years. In his will, Ted left legacies to numerous charities and institutions, including the Bancroft Library at the University of California at Berkeley, where he had spent many hours as a student. Among his bequests was the requirement that the Bancroft Library, in conjunction with the administrators of his estate, arrange for the publication of a book of Judge and Sheehy genealogy to be distributed to Ted and Ellen’s cousins.

Pat Fell, a part-time librarian at the Bancroft Library, who also worked in cataloging at the California Genealogical Society, suggested in May 2009 that the society might handle the project. After several months of negotiation, an agreement was signed in September 2009. Society members Judy Bodycote, Lavinia Schwarz, and Patricia Smith began the research for the project, assisted by Richard Rees and Laura Spurrier.